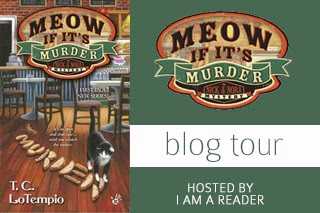 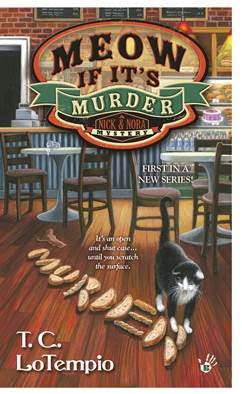 Book Blurb:
Nora Charles doesn’t believe in fate, even if she is a crime reporter who shares a name with a character from The Thin Man. In fact, she’s moving back to Cruz, California, to have a quieter life. But after finding an online magazine eager for material, and a stray cat named Nick with a talent for detection, Nora’s not just reporting crimes again. She’s uncovering them…

Back in her hometown, Nora reconnects with old friends and makes some new ones, like Nick, the charming feline who seems determined to be her cat. But not everything about Cruz is friendly. Writing for a local online magazine, Nora investigates the curious death of socialite Lola Grainger. Though it was deemed an accident, Nora suspects foul play. And it seems that her cat does too.

Apparently, Nick used to belong to a P.I. who disappeared while investigating Lola Grainger’s death. The coincidence is spooky, but not as spooky as the clues Nick spells out for her with Scrabble letters—clues that lead her down an increasingly dangerous path. Whether fate put her on this case or not, solving it will take all of Nora’s wits, and maybe a few of Nick’s nine lives.

This is definitely an easy book to cozy up with. My favorite character? Nick of course! That is, Nick the kitty. :) Who doesn't love a kitty with attitude, that can play word games, kick butt to save his lady master and solve a crime(s) to boot?

Nora Charles is a crime investigative reporter (she thinks she is a sandwich maker/sandwich shop owner) but investigating crime is in her blood. Once a mystery tickles her fancy not even her close friend or the hunk of a detective she meets can persuade to stop investigating the suspicious death of Lola Grainger, a close and good customer of her late mother's. She meets a feline who makes it's self at home in her shop. She settles on the name Nick after a favorite movie character. The cat has unusual talents that assist Nora in finding out the truth about the mystery behind the suspicious death of Lola as well as Nick's missing owner.

I enjoyed this story a lot, even though there were a few mistakes that caught my eye, but despite that, the story was packed with action and lots of interesting twists that kept me glued to my screen. If you like crime mysteries without the gore and horror, this is the book to read. There is a hint of romance, nothing that would make me gag but enough to make it fun.
Posted by Ms Saba (aka Teacher007.5) at 12:00 AM