For Autism Awareness Month, I decided to introduce my brother Na'eem who was diagnosed with autism at the age of three. My mother was only 19 years old when she found and was told by the doctor to send him to an institution. He told her she was still very young and had a life ahead of her. My mother declined and took my brother home to her mom. With the support of my grandmother, family and friends, my mother raised Na'eem and put herself through school to learn and understand what autism was and how to help my brother live a full life. Na'eem eventually became a big brother to 4 younger siblings. We learned at a young age to look out for our big little brother, to take care of him and what autism was and was not. Our brother was not disabled, he was not retarded and he was not weird. He was different. He learned differently. He reacted to situations differently. He communicated differently. He experienced life differently. He viewed the world differently. But he did not need to be treated differently. What he needed was our love and patience. 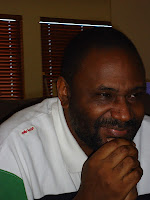 My brother Na'eem. The oldest of five siblings. He loves to straighten things up, make sure all labels are facing out, once he starts a routine he sticks to it especially meal times, he loves commercials, he loves watching MeTV (all the old shows come on the station), everyday he has to watch Wheel of Fortune and Jeopardy. He has a serious sweet tooth, is very sensitive to certain noises like coughing, infants or kids screaming and crying. If he is agitated, upset, in pain, hungry or frustrated, he will often grimace to the point of shaking his entire body or in extreme cases slap himself. He does not communicate very well but instead often uses echolalia, where he repeats everything. He is capable of very simple communication usually involving food, his schedule and family. 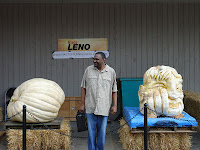 At the Tacoma Fair. Na'eem likes to get out. He liked going to the fair because of the different food and treats that were there. :)

Na'eem loves the iPad. It is actually my iPad but for some reason, he thinks it is his! :D When he can't watch tv, he grabs the iPad and searches youtube for all the old commercials he remembers watching as a kid. It took him a day to learn how to work the search on youtube but once he got it, he got it. However, when he uses the computer, he likes to search wikipedia and look up the oddest things like peanut butter, tv logos and emblems, presidents, holidays and more. 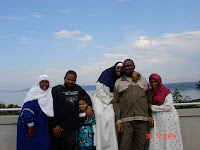 Na'eem and his siblings and the little one there in the middle is his youngest niece. Na'eem is very fortunate to be surrounded by his family. :) 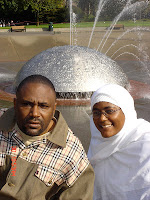 Me and Na'eem on one of our Muslim holidays, Eid-ul-Fitr. It is celebrated after the month long fast of Ramadan. He does not fast the month but we do limit television in the house during the fasting hours. But he still has his/my iPad and the computer when he gets bored. 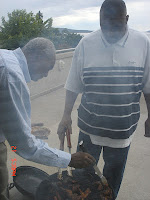 Na'eem knows every holiday and looks forward to them mainly for the food! His favorite is Thanksgiving where he dictates a list of his favorite dishes, mostly the dishes he remembers having as a kid at my grandparents home for the holiday. Here he is helping my dad grill the dogs and some chicken for the 4th of July. People with autism, depending on their severity, can be trained to do just about anything.

Na'eem loves to spin in circles. Here at the park, he has all the wide open spaces to go in big circles like a whirling dervish. When he was younger, he could do this for hours! But now that he is 45, he usually only lasts for about an hour. :)

One of Na'eem's many different ways to express himself. He usually does this with his hands when he is thinking really hard and trying to concentrate.

Na'eem loves everything chocolate. He memorizes birthdays like people remember their names. When he meets a person the only thing he wants to know about them is their name and birthday. On anyones birthday, he wakes up and sings happy birthday and asks for chocolate cake and chocolate ice cream. Close friends and relatives give in to his choice of flavor of cake and ice cream.

Na'eem goes just about everywhere with us. Here he is visiting Mt. Rainier. I don't think he cared too much about the mountain, the view or the snow. This is actually the only pic we have of him smiling and this was when we were coming down off the mountain and getting ready to go home!

And that everyone is just a small glimpse of autism as it relates to my brother Na'eem. We have so many stories of his childhood and adulthood. A child with autism can be a challenge for them and their family, but with love and support, children and adults with autism can lead a full and happy life. Na'eem in Arabic means blessing, and he is truly a blessing to us and all who gets to know him. :)