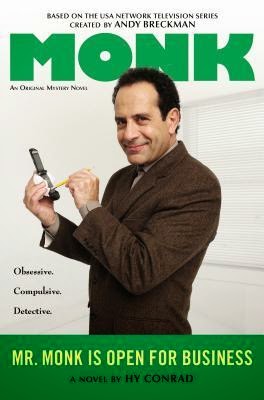 After failing to win back his girlfriend Ellen in Summit, New Jersey, Monk returns to San Francisco where he is surprised to find another relationship has taken a new turn. Natalie decided to make things official by setting up an office for Monk and Teeger, Consulting Detectives. With Monk’s typical response to change of any kind, they have more than a few wrinkles to iron out of their new routine. But when Lieutenant Amy Devlin comes to them for help, it’s time to stop bickering and get to work.

A disgruntled employee of a small import business, Wyatt Noone came into work one day and started shooting, killing three coworkers and leaving one female hostage severely wounded. Spotting Wyatt through the office windows, the police surrounded the building, but he still managed to disappear—leaving Lieutenant Devlin with a messy and baffling mystery on her hands.

Visiting the bed-ridden survivor, Sarabeth Winslow, Monk finds her to be helpful, cooperative and—now that he’s on the rebound from Ellen—quite charming as well.  But as he and Natalie try to track down Sarabeth’s assailant, they discover that Wyatt has left barely a trace of his past behind, almost as if he managed to disappear from existence all together…

So I gave this book 3 stars on Goodreads. It is not my normal rating for my beloved Monk series. It is not that I did not like it, I did, but it just was not the same. Monk was not the same. I missed many of his compulsive quirks that I found entertaining in the books Goldberg wrote. He still has a few in this story but his behavior, attitude and desire to have a love life is not characteristic to the Monk I know. But like I said, it was still a good read. I wont write off one of my favorite detective series for now, I will read a couple more authored by Hy Conrad to see if I can handle this new Monk. But on a side note, I love seeing more of Natalie's character in the story. :)

Monk and Teeger open their own agency and takes on a big case the very first day they open their doors. A lawyer's client, Henry Pickler is in jail on suspicion of killing a man in his field but Pickler is not talking, not even to his lawyer. Another case they take on at the same time is a case that Amy Devlin has brought to them. A man named Wyatt Noone kills his coworkers leaving one badly shot but manages to escape under the noses of the police force, including Amy Devlin. With her reputation and career on the line she gets help from none other than Monk and Teeger. Monk is on the rebound after his girlfriend dumped him for getting her brother arrested. Now, he is in love with Sarabeth, the lone survivor of the shooting spree. As Monk and Teeger investigates, a lot of things don't add up and with Monk's attention else where, Teeger has to a lot of leg work. But she manages to get Monk's head back in the game before it is too late and they catch the real killers in both cases.

I do love MONK. I have read a number of books & loved them. Adding this one to my list. A helpful review thank you.

MONK is by far my favorite detective show on TV.