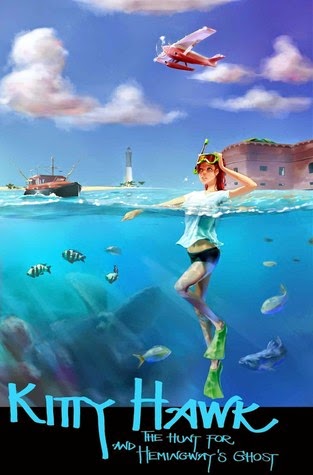 Book Description: Kitty Hawk and the Hunt for Hemingway's Ghost is the exciting second installment in a new series of adventure mystery stories that are one part travel, one part history and five parts adventure.

This second book in the series continues the adventures of Kitty Hawk, an intrepid teenage pilot who has decided to follow in the footsteps of her hero Amelia Earhart and make an epic flight around the entire world. After flying across North America Kitty's journey takes her down south to Florida where she plans to get a bit of rest and relaxation before continuing on with the rest of her long and grueling flight.

As Kitty explores the strange and magical water world of the Florida Keys her knack for getting herself into precarious situations sweeps her headlong into the adventure of a lifetime involving mysterious lights, ancient shipwrecks, razor-toothed barracudas and even a sighting of the great Ernest Hemingway himself. This exhilarating story will have armchair explorers and amateur detectives alike anxiously following every twist and turn as they are swept across the landscape and history of the Florida Keys all the way from Key West to the strange and remarkable world of Fort Jefferson and the Dry Tortugas.

In the second book of the Kitty Hawk series, Kitty is visiting the Florida Keys for a couple of weeks before beginning her major solo trip around the world.

This adventure around, she has to figure out the mystery of Ernest Hemingway's ghost who seems to be writing yet another great American novel, mysterious green glowing lights out in the waters surrounding Fort Jefferson, and the hunt for ancient ship wreck.Naturally, Kitty finds herself in very dangerous situations that she has to get out of but she always manage to do it with flare and sometimes......SPOILER ALERT....flames, as in a homemade Molotov cocktail! Seriously, where did she learn how to make one of those?

My favorite part came toward the middle of the story. Her visit to the Fort Jefferson and Dry Tortugas National Park. I learned a lot about the history of Fort Jefferson, why it was there, how it got there and other hidden mysteries in its waters. The story is packed with fun tidbits of historical information.

What I didn't care too much for is how long it took to get to the good part of the story. Her time in Florida seemed to drag out for a long time. Nothing THAT interesting happened except for the Hemingway ghost sighting at his famed writing spot. In fact, the title seems misleading because she really isn't looking for the ghost through out the story. Most of the story is about trying to figure out the who and why of the mysterious glowing lights out on the water.

Overall, it was a fun read. I'm looking forward to Kitty's next adventure.