Guest Post: On Chapter Books by A. H. Richardson


Chapter books are becoming more and more popular with parents and children. They are great for transitioning younger readers from picture books that rely heavily on illustrations to tell a story to longer more complex stories and plots that rely less on illustrations as it does on prose.

My guest writer today is the author of Jorie and The Magic Stones, the first book in a new chapter book series by A. H. Richardson. Today, she explains the importance of chapter books and why she chose to write in the genre.​ 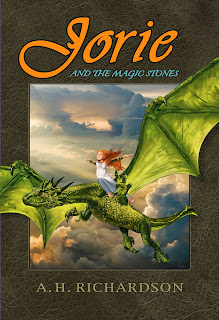 Every book that I ever read, or that was read to me, had chapters.

I couldn't imagine a book without a chapter, any more than I could imagine a 'Banana Split' without bananas! Why do I think that a lot of authors are going back to the 'chaptering' of books?

I can only speak from my own personal reasoning, which is that a 'Chapter' has a delightful way of compartmentalizing everything so neatly ... it is a way of putting the forthcoming part of the story, into a little 'box', designed to pique the interest, but not to tell too much at the same time. You want to excite interest and curiosity in what is yet to come, without giving away important secrets. In its own way it is a story 'teaser.'

​When reading to children, or when children are reading for themselves, the end of a chapter signifies many things; as in "that's all you get to read for now", or "end of chapter, let's finish homework!" or "We'll read Chapter Ten - Chook Disappears', tomorrow, when you've done your chores" -- or whatever the rationale might be. The child gets to read the story in little sections, which I think always works well for them.

​As to the genre of story, what could be more bewitchingly delicious than a story about a nine-year old heroine and a magnificent dragon, liberally peppered with all sort of fun bad guys, and a wonderful boy companion, Rufus. My goal was to make this story (or this series, I should say) as enjoyable to grownups, as to the children, and I believe that I made it for this age group for one very good reason: I have not advanced much myself beyond the age of about 12, so I believe I can present a wonderful world to this age of child ... not quite child, and not quite grownup.

Email ThisBlogThis!Share to TwitterShare to FacebookShare to Pinterest
Labels: Guest Posts, On Writing

Ever since he took a bite of a legendary dessert last summer, twelve-year-old Guster Johnsonville has never been the same. In fact, when a strange little man dressed as a conquistador comes clattering into the barn at the back of the Johnsonville farmhouse one afternoon, he forces Guster to face the truth: Guster is now the most delicious thing in the whole world, and a terrible monster is coming to eat him. The monster is one of the Yummies—a pack of horrible, ferocious creatures with an appetite for sweets. What other choice do Guster, Zeke, and Mariah have than to run away from home to escape the mysterious beast? On the run in a far corner of the world, Guster and his siblings discover a secret settlement known as the Delicious City. Now, with the Yummies hot on their trail and the Delicious City’s Mayor determined to feed Guster to the beasts, Guster must embrace his talents as an Evertaster if he’s going to save the city from collapsing and get his family out alive.

Praise “Fast paced and full of heart! I gobbled up every word of this book buffet!” –Frank L. Cole Author of The Afterlife Academy "The perfect recipe for edge-of-your-seat action!" --Peggy Eddleman, author of Sky Jumpers

In between books, Adam Glendon Sidwell uses the power of computers to make monsters, robots and zombies come to life for blockbuster movies such as Pirates of the Caribbean, King Kong, Transformers and Tron. After spending countless hours in front of a keyboard meticulously adjusting tentacles, calibrating hydraulics, and brushing monkey fur, he is delighted at the prospect of modifying his creations with the flick of a few deftly placed adjectives.

Ends 12/12/16 Open only to those who can legally enter, receive and use an Amazon.com Gift Code or Paypal Cash. Winning Entry will be verified prior to prize being awarded. No purchase necessary. You must be 18 or older to enter or have your parent enter for you. The winner will be chosen by rafflecopter and announced here as well as emailed and will have 48 hours to respond or a new winner will be chosen. This giveaway is in no way associated with Facebook, Twitter, Rafflecopter or any other entity unless otherwise specified. The number of eligible entries received determines the odds of winning. Giveaway was organized by Kathy from I Am A Reader and sponsored by the author. VOID WHERE PROHIBITED BY LAW. a Rafflecopter giveaway
Posted by Ms Saba (aka Teacher007.5) at 3:04 PM No comments: 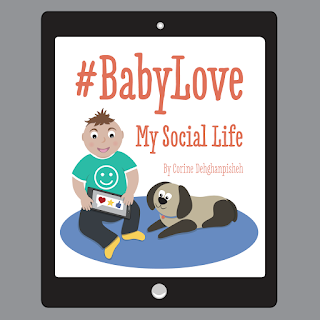 Opening: As I awake, a recording begins with family love and many grins.

When baby wakes up, his day begins with a click. Likes, hearts and thumb ups follow him throughout the day as his parents snap, record and post his every move to social media and networks.

A modern day tale from the point of view of a baby showcases how we use (and in my own personal opinion, sometimes overuse) technology and social media to stay connected with family and friends. I believe parents who enjoy capturing and sharing their children’s milestones and activities will find #BabyLove My Social Life entertaining.

While I was not a huge fan of the illustrations, they are bright and colorful and will be sure to catch the eyes of little ones.
Posted by Ms Saba (aka Teacher007.5) at 6:47 PM No comments: