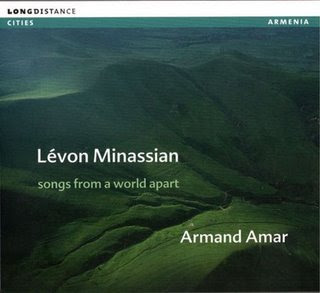 I have been spending a lot of time trying to develop one of my characters in my novel. In my attempt to get to know her, hear her voice, I have learned a lot about her personality, her history, and culture. Like many writers, I sometimes like to listen to music while I write. I find that it helps me block out other noises around the house like the tv, computer, phone and etc. I was listening to Yanni one day while writing about this particular character, Nusa from the Naqabashi clan. One of the instruments playing was a duduk, an Armenian instrument. It was really pretty. It somehow fit in with the mood of the writing, the personality of my character, and the topic being discussed. So I looked around for other songs similar to Yanni's and came across this cd. I chose three songs that I felt represented my character's situation:
Nare nare
Araksi artassouken
Nusrat's allap
Although all of the songs were really nice, most just were not what I needed for Nusa.
What music or song would best define your character?
Posted by Ms Saba (aka Teacher007.5) at 9:54 PM

I usually do a "playlist" of my character's favorite music after I have a good working draft, but I can't listen to music while I'm writing --- at least music with words. Weird. I know.

My favorite writing music is anything by Chopin. Love classical music.

Same here Karen, if I listen to music that have words, it has to be in a foreign language, that way I don't know what it's saying and not influenced by the words in the song. My dad has an ethiopian cd that i borrowed which I use some times. There are two songs that are really nice and mellow for writing to.