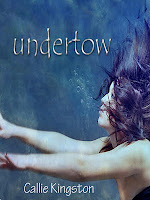 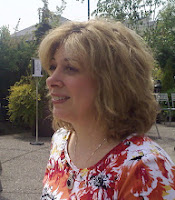 About the Author: My home is in the Pacific Northwest, where I live with an assortment of furry creatures (husband included). I have a masters degree in Psychology. When not writing or working, I like to explore the outdoors, especially the forests and beaches along the Oregon coast. I also enjoy a great cup of cappuccino, which happily is easily found in this part of the world.

What inspired you to write "Undertow"?
Undertow began as an idea I had about a young woman on the brink of developing a mental illness. While visiting the Oregon coast, I discovered a book that contained legends and lore from the original peoples of the region, and was intrigued by the tale of a merman who lured a young woman out to sea to become his bride. I set about to combine these two concepts, and Undertow was born.
Who is your favorite character in your book? Why?
Actually, I love Marissa’s best friend Kelly. She’s complicated, and lets Marissa down, but is also her biggest supporter.
Did you have a favorite chapter?
I think toward the end, when Marissa really comes into her own and faces the truth of her past, resonates with me in a way the early chapters don’t. Even so, I can’t say I have a favorite chapter.
Many authors say that the revision and editing is the hardest. How different is your book (the final product) from its first draft?
Oh, my. Undertow went through over a dozen drafts. The original was written in long hand in notebooks I carried everywhere. I wanted to capture the immediacy of her dilemmas, so wrote in present tense, which was universally disliked by early readers. Various subplots were removed and inserted through the multiple revisions.
What was the oddest or most interesting thing you learned as you researched the topic of your book?
Well, the oddest thing was definitely that the information simply appeared randomly. For example, the scene in which she discovers the book of American Indian lore containing the merman legend was based on what actually happened as I was writing. Beyond the synchronicities, I also was intrigued to discover a gorgeous underwater sculpture in Copenhagen which depicted the legend of Agnete.
What is the most difficult part of writing? and how do you overcome that difficulty?
Time, hands down. There aren’t enough hours in the day. I work full time and care for a busy family, so I take care to carve out time to write. Often, I’ll go away for an overnight retreat in an inexpensive hotel room to catch up on revisions.
What was your road to publication like?
Once I decided indie publication was the best path for me, it’s been an amazing journey. I’ve learned so much (how to create a cover, formatting, the entire business end of things). Plus, I’ve met lots of wonderful new friends in the blogosphere.
Are you working on another project?
I have a second Contemporary YA out to beta readers which I expect to publish this summer. It’s a bit of a lighter read, but still tackles serious themes. And I just started writing another novel, also YA, but this one’s a paranormal thriller.
Where can readers find your book?
It’s in the Amazon KDP select program, so Amazon Prime members can borrow it for free. Or you can buy the Kindle version. Trade paperback will be available soon as well.
If you could meet your favorite author (past or present) who would it be? Why?
I’d love to chat with so many authors I admire, but I’ll pick just two. Laura Halse Anderson, because her novels are beyond amazing and powerful. And Libba Bray, because she’s hands down the most hilarious, witty, and brilliant YA novelist of all time.

Best of luck with Undertow - it sounds great! And I love your choices of Laurie and Libba to meet - fabulous author's both!!!

Thanks for having me here today!

Thanks Susanna. Yes, they are definitely two of the most talented YA authors.