Choose Your Own Adventure: Run out of the Japanese Tea Garden 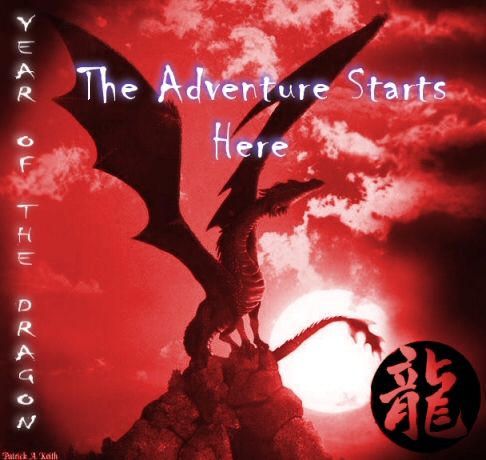 You run out of the Japanese Tea Garden and take cover at the Bison Pavilion
You watch the large beast flap away then collapse flat on your back. You count to ten before getting up and making your way out of the Japanese Tea Garden toward the Bison Pavilion. There is a security guard station there where you can report the dragon. You start running then stop.
Are you out of your mind? Who in their right mind would believe you? Dragons in San Francisco. Yeah, that will get you thrown in the looney bin faster than you can say....... before you can complete your thought, the ground shakes again. Oh no, you think, it is the dragon again.
You duck behind a tree and scan the sky but don't see anything. You step out from behind the tree then all of a sudden six dragons drop to the ground surrounding you. Their chest rising and falling and their snouts puffing like a chimney. The smoke swirled around you, you can feel the heat of their breath burning your skin underneath your clothes. A low, trembling grumble sounds deep in their throats. These beast were mad. Fire raged in their eyes.


"Is this the human," you hear one growl.
You turn in circles trying to locate the beast who was talking. Two massive beasts separate to allow another beast through. Well what do you know, it's the little dragon. On his back is a little girl who managed to talk the big dragons out of beating up the little dragon and accept him as he is. You give a weak chuckle.
"He, he, hey," you say, How's it going?" You try to smile but your lips press to a grimace.


The dragon narrows his eyes at you and frowns.


"Yeth," he says looking up at the biggest of the dragons, 'Heeth, the one. Heeth the mean humanth who abandoneth me to my demeyeth. I athked for help and he juth ran away. He wath going to let you rip me aparth. Heeth juth rude and unfrienthly."
The dragons roar.
"No one can be mean to our little dragon brother and gets away with it," the dragons bellow and begins stomping the ground around you. You fall to your knees. This is the end. You are going to die.


"Please don't eat me," you cry out. "I was afraid, I didn't know what else to do?" You are trembling, your face in your hands.


"Good heavens we aren't going to eat you," one of the big dragons says rolling his eyes.


"Yeah, especially a scrawny pint like you," another dragon says flicking you onto your back with his claw.


"No, we have something special for you," the biggest dragon says with a sneer.


The dragons circle you, laughing and puffing smoke on you.


"The next time someone comes to you asking for help, you better think twice before running away," they taunt before flying off, leaving you hanging from the flag pole by your underwear just as the high school bell rings.
The End


Go Back: Run like the Devil away from the effeminate Beast
Go Back: Stay and try and help him?
Start Over:

Ha ha - love the ending. Well, I suppose at least you were wearing underwear!

lol! yes, I guess there could be worse fates :D