Have you ever had a hard time describing something to someone and they just did not get it? 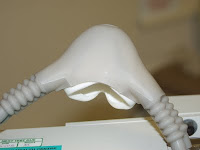 I went to the dentist today. Normally I would ask to be sedated, I am not really all that good with pain, but for some reason the dates got mixed up and the receptionist scheduled me in the middle of the week instead of on a Friday when my dentist does her sedation appointments. So we had to reschedule. But my tooth was really bothering me so I asked her if I could keep the date and try it out without sedation. My dentist applauded my bravery (lol) and said yes. She suggested instead I get nitrous oxide. So, I got seated and the assistant put a thing over my nose so I could take in oxygen first then the nitrous oxide. She kept asking me, how do you feel, is the nitrous oxide working? I inhaled (deeply.) I honestly did not know if the stuff was working or not. I did not feel any different.

Finally I had to ask her, "How am I suppose to feel?" She answered, "Well most people describe it as the feeling you get when you drink alcohol." I thought to myself, "Well that doesn't help much, I have never had alcohol in my life so I have no idea what that feels like!" So I told her. She tried again and said, "well, you should feel like you are floating." Now, the only people I associate with "floating" experiences are those who take drugs (my mom was a social worker), and I have never done drugs in my life. I have never even smoked a cigarette. So, needless to say, I did not feel like I was floating. So she turned the gas up a notch and I inhaled even deeper. A few minutes later, nothing but I was beginning to feel a little relaxed and not uptight about being in the dentist chair. Not to mention, I was listening to some really nice and relaxing music with ocean sounds and Native America flute. But I was still not sure if I was reaching this "nirvana" state that she was trying to describe. So up the gas went. Finally, something was happening. I was getting really sleepy.  My dentist came in and asked me how I was doing. I managed to open my eyes and with a half cocked smile nodded and I think I said I was doing fine. She laughed and said, "You are liking that nitrous oxide."

So back to description and describing. It is important to have a diverse vocabulary to be able to describe an emotion, feeling, action or scene to a person(s) who may or may not have your experiences. As the assistant tried to find ways to describe the affects of nitrous oxide on people, she did not take into consideration that maybe some one like me, a Muslim, has never had alcohol before and thus does not know what it feels like to be drunk, loopy or 'floating'. Now, had she asked me if I had ever gotten a  massage before, then I would have grinned and told her to crank the gas up. :D

So in the end I learned that nitrous oxide helps relax you, takes the edge off of your anxieties and release a lot of tension. Maybe some people do feel like they are floating but I felt relaxed enough to actually say I was sleepy but awake enough to hear everything going on around me.

Have you ever experienced a word, emotion, feeling or scene in your writing that you could not describe or had a hard time describing?
Posted by Ms Saba (aka Teacher007.5) at 2:54 PM

I HATE the dentist! Ha. My main character has a feeling of numbness, emptiness. But those two words just don't seem to do the feeling justice. Still looking for the right word(s).