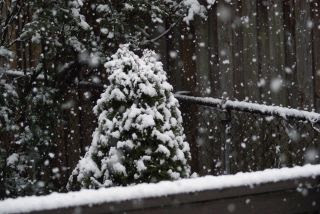 Hello everyone! Welcome to another fabulous Monday!!! Over at Susanna's blog she is doing a fun Monday Morning Spark where the writer chooses five words to create a piece. Here are my five words, a pic from yesterday and my short piece using the five words. :)
snow
white
cold
work
play
I woke up this morning to a white covered world. Snow blanketed the roads, trees, pathways and rooftops. As cold as it was, I jumped out of bed to check and see if school would be closed for snow-day. But would you know, no snow day. Instead we were opening up late but not so late that I get a few extra hours. No, we opened at 8:30 just when my shift started. Well, I got to work, ready to play (and learn) with my toddler classroom, all of them! That's right, we were open on MLK day and while many of the parent's had the day off, kids still arrived on time. So, the day went on as usual. We had breakfast, read books, played with musical instruments, learned and matched cut out felt shapes. Outside time was a blast. The little ones had a ball playing out in the white snow despite the cold. Even brought some snow inside to put in our sensory table to play with later. So, even though it was a cold, no snow day, full classroom, kind of work day, I had an awesome day with my toddlers!
Posted by Ms Saba (aka Teacher007.5) at 8:40 PM

I thought MLK was a public holiday in the US!! Sounds like you had a wonderful, white day with those toddlers, anyway!

Me too! But yes, I did have a fantastic day :D

Aww, so nice! Your toddlers are luck to have such a devoted teacher! Glad you were able to get some use out of the sparks :)

Thanks Susanna! Your sparks idea was great for getting me to write. I almost did not do my Monday Muse post but the sparks idea got me to think and write :)