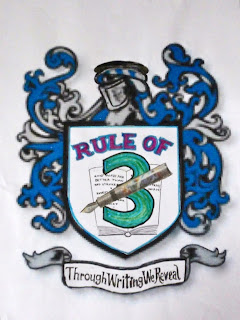 The Rule of Three Blogfest, or REN3 continues! It's hosted by Stuart Nager of Tale Spinning, Damyanti Biswas of Daily (W)rite, Lisa Vooght of Flash Fiction, and J.C. Martin of Fighter Writer. My story is below. Check out part one if you are new to the Blogfest or need a refresher :) Enjoy!


Part Two
“Take this to the storage room, Kahalee,” an elderly man says passing the lad an armload of packages and boxes.
Traditional medicine men from Kanda, Kahalee and his grandfather run a pharmacy in the remote town of Renaissance. They happened upon the robust town as they traveled west on the Espadon River escaping war and poverty in their homeland.
His grandfather piles the boxes high. Kahalee can barely see over the last box. He grins. His grandfather loves challenging his physical and intellectual abilities. Kahalee’s muscles bulge under the weight of the load. He turns and waddles away. He descends a flight of stairs that lead to a long hallway with locked storage rooms beneath their store. Kahalee looks to the far end of the hall. An ominous black door stares back.
"You are never to enter this storage room," his grandfather's voice echoes firmly in his head. But something draws him to the forbidden door. He sets the boxes down carefully and fumbles for the keys. Key after key, the door remains lock. Just as he gives up and turns to continue his task, his foot kicks a loose tile. As he puts it back, he notices it is uneven. He finds a key beneath the tile. Kahalee snatches up the key and inserts it into the lock. He pauses for a moment, but a powerful hypnotic force behind the door compels him to turn the key.
The room is no different than the others, cold and filled with boxes of herbs, medicines and potions. A powerful generator keeps the temperature just above freezing point. The encroaching Schiavona desert brought with it dry windstorms and scorching summer days. Again, he feels a pull against his chest towards a corner hidden behind sacks and crates. While pushing them aside, Kahalee's hand hits a medium sized black metal box.
“What’s this,” he says, running his hand over it. Sadness, fear and horror creeps up his hand and arm. Kahalee snatches his hand away. Never had an inanimate object evoked such emotions. The smooth and cold sensation sparks a memory, a long forgotten memory of his past. A disturbing memory hangs at the back of his mind, screaming, pain, fire, a name ‘Faydal’ and the stench of death. Yet, he could not explain what and why this box was among the most volatile and delicate medicines. This unnerves Kahalee because he is known for his excellent memory and attention to detail.  He tries to open it but the black cube has no locking mechanisms and is sealed tight. Kahalee tries to lift it but it’s secured to the storage room’s concrete floor. Then it happens, a tingly feeling in his hands, then numbness. Kahalee hears the bell of the front door opening.


“Ka-haa-lay,” his grandfather calls from the shop. Must be one of our close friends and customers Kahalee thinks to him self. His grandfather never yells in front of strangers. And as long as they have lived in Renaissance, he still considers the towners and settlers as strangers. Kahalee shakes his hand to get the feeling back. He closes the door and locks it. He turns to find his grandfather standing behind him, a look of horror in his eyes.
"Did you touch it, Kahalee?" his grandfather demands.
Kahalee shakes his head.
“Did you touch the box?"
Kahalee only stares at his grandfather, his eyes mirror shock, horror, fear and pain. His grandfather looks at Kahalee’s hands and his chest drops.
"You have killed us all, Kahalee," he says in a soft, defeated voice. “Faydal.”
word count: 599
character: Kahalee
prompt(s): One of the characters is revealed to be not who he is, A character lies about an important matter, Someone is killed or nearly killed.

well now another mystery - another puzzle - one can't help feeling sorry for this town we are all about to be real mean to it:)

OY! What was he thinking? WHY did he touch that box?!!! I'm guessing things are about to get a whole lot worse! Can't wait for the next installment :)

Suspenseful entry! I can't wait to find out what's going to happen to the characters . . .

Looking forward to round three.

"You've killed us all" ! Well, that's quite a cliffhanger for next week!

How chilling, I'm completely intrigued! What a great writing challenge. I'm enjoying this!

can't wait to see what's in the box that could kill us all.

Very gripping and exciting! I can't wait to read next weeks' segment.

Nice way to use the prompts! I can't wait for the next chapter ... but it's only half a week to go now.

Very "pandora's box"...why are people always touching things they know they shouldn't touch? Because it makes the story more interesting... =) I'm curious about how your stories connect and what will happen next.

Death and destruction in the future. Can't wait.