No Secrets. No Lies. Part Two (an interview) 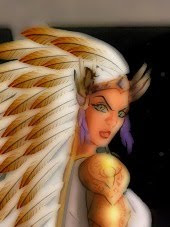 Interview Part One:
Interview Part two:
Q: What does it mean to be telepathic on your world?
A: It is our form of communication. It means to have a complete understanding and to be one with my sisters
Q: Is there any kind of privacy when it comes to mind reading and communication? A: We have no need of privacy, only respect and honor.
Q: Is it difficult not having private thoughts?
A: No. I have nothing to hide. But I can see how a being such as your self would find it difficult, and would need to hide and protect yourself and your weak and feeble desires. But we have overcome those desires of greed, lust, envy and power. We Naqabashi are masters of our Hakana, our being, and therefore have no need for secrecy. We have evolved.
Q: So, it hasn’t always been this way for the Naqabashi?
A: No. We were once like you and the land dwellers of Naqaba. We did not understand our abilities; we were feared by non-telepaths and often used it against each other for our own gains.
Q: Then what changed?

A: Time, knowledge, understanding and a common enemy.
Q: A common enemy?
A: Hai. We became feared, demonized when the leaders could no longer control us. Our people, the
Naqaban, turned on us, they hunted us down and murdered us by the hundreds. Shackled and chained, we were forced to become slaves. Any Naqabashi revolt was squashed. We lived under oppression by our own people. Our Naqaban dictators even took our telepathic abilities from us. A Naqabashi caught using telepathy was either clipped or killed for repeated offence.
Q: How awful. When did the laws of concealment be introduced to the Naqabashi?
A: It was not until we gained freedom from the land dwellers that we found our way and mastered our Hakana. But the events of our past remained with us. We lived in constant fear of betrayal. It was not until our first city, Cloud City, was built that the law was passed.
Q: What does the motto, “No Secrets, No Lies,” mean?
A: It means that only when one is honest and forth coming, can there be truth in all that one says and does. If you do not hide or keep secrets, then everything you say and do is considered truthful. With secrets comes lies, with lies come betrayal, with betrayal comes treachery, and with treachery comes dishonor and death.
Q: How do you know if a Naqabashi is hiding a secret or concealing her thoughts?
A: It is as though a door is shut on you. But if you want a more scientific explanation, then our brains release a chemical when one is concealing and hiding her thoughts as it takes much effort for a Naqabashi to close her mind to another Naqabashi.
Q: What happens if a Naqabashi is caught hiding a secret?
A: The practice is forbidden and punishable by death called a showing.
Q: Have you ever witnessed a showing?
[She stared at me for a long time; her eyes became distant and sad. She got up and walked to the window and stared out into space. Our interview had ended.]
Posted by Ms Saba (aka Teacher007.5) at 2:21 PM

That was haunting, I loved it!

Thanks Heather. the Naqabashi are a haunting race! :D

Safia. Glad you liked it :D