Book Review: Due for Discard by Sharon St. George 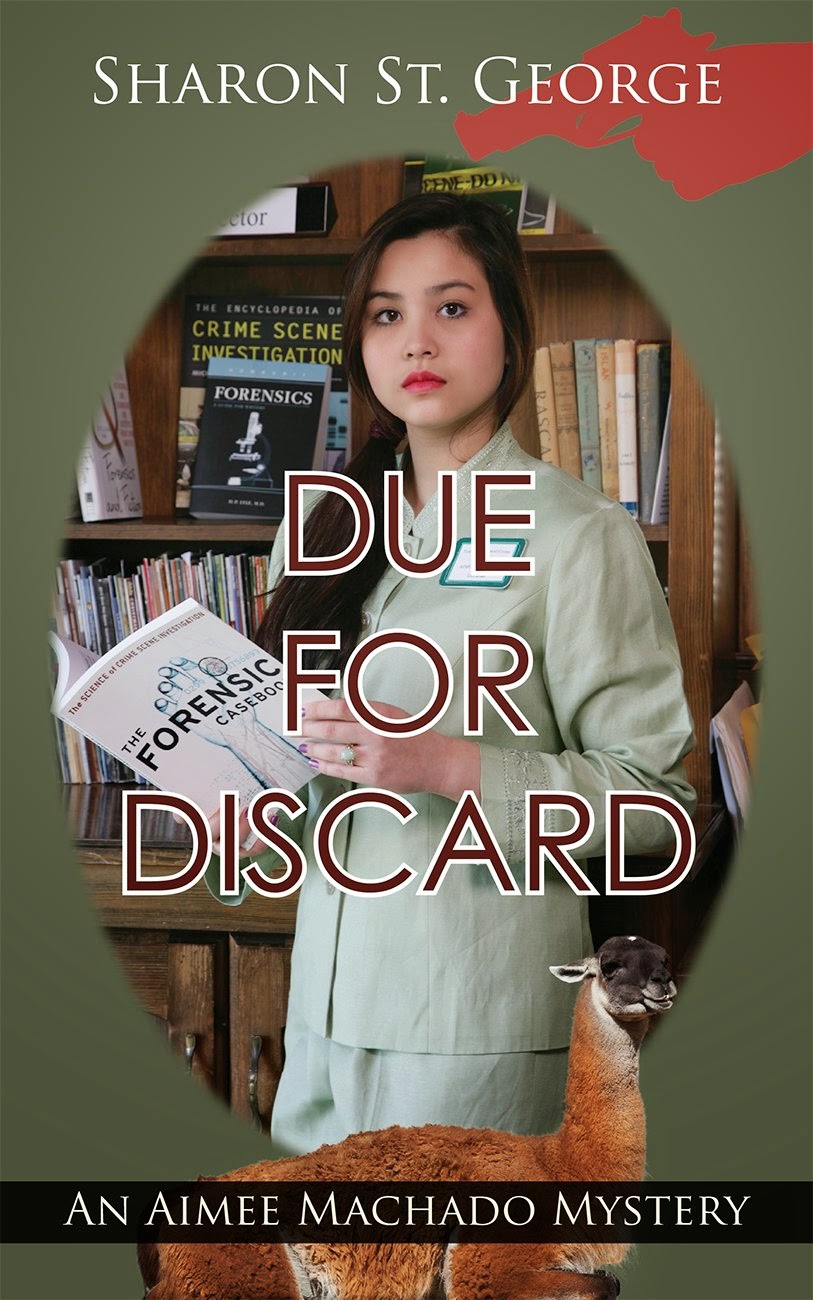 Title: Due for Discard

Aimee Machado is thrilled to be starting her first job as a forensic librarian at the medical center in the town of Timbergate, north of Sacramento, California. Her ebullient mood is somewhat dampened by her recent breakup with her former live-in boyfriend, Nick Alexander. And then there's a little matter of murder: on Aimee's first day on the job, a body is found in the hospital Dumpster, soon identified as her supervisor’s wife, Bonnie Beardsley.

Aimee’s heartbreaker of a brother and best friend, Harry, just happens to be one of the last people to see Bonnie alive, but he is hardly the only suspect. Bonnie was notorious for her wild partying and man-stealing ways, and she has left a trail of broken hearts and bitterness. Aimee is determined to get her brother off the suspect list. Aimee's snooping quickly makes her a target. Isolated on her grandparents' llama farm where she fled post-breakup, she realizes exactly how vulnerable she is.

Three men have pledged to protect her: her brother Harry, her ex, Nick, and the dashing hospital administrator with a reputation for womanizing, Jared Quinn. But they can’t be on the alert every minute, not when Aimee is so bent on cracking the case with or without their help.

Aimee starts work at a dream job, a forensic librarian at Timbergate Medical Center. Her thrill is overshadowed by her recent breakup with boyfriend, Nick Alexander, a pilot for a rich philanthropist. On her first day of work, a murder is discovered. Not any murder, but the murder of her boss's wife. A woman with many secrets and even more vices. Nothing prepares Aimee for what she finds out next about the murder. Her brother, Harry, knew the victim AND saw the victim before she died. An investigator with a grudge is convinced Harry should be pinned with the murder. As things heat up and Harry is officially made the #1 suspect (after the victim's husband, of course) in the case, Aimee beefs up her detective and forensic knowledge to help find the real killer. She finds help in her new interim boss, single and good looking, Jared Quinn and ex-boyfriend, Nick. Aimee's first 'warning' goes unheeded. Now, she is convinced her brother is being set up. With a whole list of suspects, dangerously mounting threats and a conflicted love life, Aimee pushes on for the truth, whether it kills her or not.

What I loved: I enjoyed the characters. They were fun and easy to get to know and care about. It took me awhile to warm up to Nick but I liked him best of all. Aimee was a complicated character. I would like to say she was a strong character and it seemed like it. She is dedicated and loyal to her brother, to the point she risks her job, safety, and life to clear his name. Yet, she seemed to get herself into a lot of trouble she needed help getting out of, I was a bit disappointed her black belt was not featured as much in the story. I love a mystery where I suspect EVERYONE. With the exception of Nick, Harry, Amah and Jack (Aimee of course) anyone could have been the murder. After all, Bonnie Beardsley left a long trail of broken homes and hearts.

What I didn't like: The pacing of the story did not feel consistent. There were times where it seemed to move at a slow pace and then there were the "can't blink because I might miss something"  pace, like the final showdown! While I enjoyed the characters, there a were quite a few main players. It made it hard for me to keep up with the who's who and who did whats.

Overall, I enjoyed Due for Discard and look forward to seeing other books in this series.

Saba, thanks for the review! :)

Thanks so much for your review.

Thanks for shaykh the great review!

Thanks for sharing the great review!