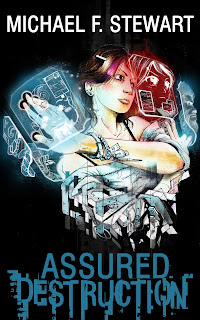 Assured Destruction:
Sixteen-year-old Jan Rose knows that nothing is ever truly deleted. At least, not from the hard drives she scours to create the online identities she calls the Shadownet.

Hobby? Art form? Sad, pathetic plea to garner friendship, even virtually? Sure, Jan is guilty on all counts. Maybe she’s even addicted to it. It’s an exploration. Everyone has something to hide. The Shadownet’s hard drives are Jan’s secrets. They're stolen from her family’s computer recycling business Assured Destruction. If the police found out, Jan’s family would lose their livelihood.

When the real people behind Shadownet’s hard drives endure vicious cyber attacks, Jan realizes she is responsible. She doesn’t know who is targeting these people or why but as her life collapses Jan must use all her tech savvy to bring the perpetrators to justice before she becomes the next victim. 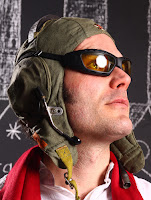 Michael F. Stewart's Bio:
After crewing ships in the Antarctic and the Baltic Sea and some fun in venture capital, Michael anchored himself (happily) to a marriage and a boatload of kids. Now he injects his adventurous spirit into his writing with brief respites for research into the jungles of Sumatra and Guatemala, the ruins of Egypt and Tik’al, paddling the Zambezi and diving whatever cave or ocean reef will have him. He is a member of the International Thriller Writers and SF Canada, and the author of the Assured Destruction series, 24 Bones, The Sand Dragon, Hurakan, Ruination and several award winning graphic novels for young adults.

I have to say, I was really impressed with this book. Assured Destruction was a fun, captivating, fast-paced and adventurous read. Mystery does not even begin to describe the suspense of the book once it get toward the middle of the story. Most books I don't read in one day, but this one I could not put down!

Janus Rose is a sixteen year old who works at her mother's business, Assured Destruction, a place where people go to have their electronic devices recycled or completely destroyed.  Her mother has MS and therefore relies a lot on Janus to help keep their business running and caring for her. Janus's job is to wipe clean the hard drives for recycle or send them through chop chop, their metal shedder. Easy enough right? Except, Janus is a computer wiz kid, app developer and hacker. With little to no time for socializing with kids her own age or anyone for that matter, Janus creates her very own social network of family and friends called 'Shadownet' out of the discarded hard drives of Assured Destruction's clients, including her real life classmates and friends. Everything is fine until one day she gets a laptop from a mysterious foxy lady which she is suppose to promptly destroy, only she doesn't when she finds it belongs to a classmate, Johnny. She proceeds to create a Johnny profile to add to her "friend" circle. But soon things go wrong, really wrong. Her real life friends begin to come under attack online (and offline) and information only found on their "discarded" hard drive begins to appear all over the web. It is not before long, Janus finds herself tangled in a web of deceit, danger and death, as well as the loss of her family's only source of income. Janus defies all logic and goes after the culprit trying to destroy her, her family and friends.

What I liked:
I loved the character, Janus. She was well developed. She felt like a real teen, smart, responsible (sort of), strong-willed, sassy, creative and perfectly flawed. Her decision making skills were quite lacking. While I think she deserved everything that happened (minus the injury but kids have to learn their actions have consequences), I was rooting for her the whole way. I loved that she had the integrity to fix her mistakes and to protect her family and friends (even the ones who turned on her).

The story was unique. I don't think I have read anything like it. It was modern, even I could relate to the use of present day technology and social media. It addressed a real present day problem of not being careful with your data, identity theft. While Janus, did not pose a real threat, others do.

What I didn't like:
The love triangle. I'm not a fan of romance so I was not all that into the love triangle. I thought it was pointless. While I loved the ending, I thought the last line was a bit cheesy and a bit over dramatic. I think the author did a great job keeping the pace however there was one part that I felt was a over described and  bit drawn out. I don't know if it was because it was overdone, or the nature of the scene, or because I was so tensed and terrified for Janus that the scene seemed to take so long to get through. I found myself trying to skim over it to get to her actual escape and rescue.

Overall, I enjoyed Assured Destruction. It is a fast, engaging, and entertaining read, great for a rainy day.
Posted by Ms Saba (aka Teacher007.5) at 12:00 AM

Thanks so much for the awesome review, Ms Saba. Great to have a teacher's perspective. :)

I agree, Saba! I never read anything like Michael's book before either. It's so fresh and innovative, isn't it? Thanks for the wonderful review :)