Author Interview + Book Giveaway: The Roses in My Carpet by Rukhsana Khan 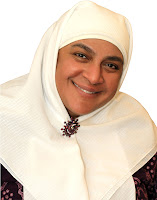 Hello everyone. Happy Thursday!!! I would love to introduce you to another amazing writer today. Meet Rukhsana Khan. She is an award-winning author and storyteller. Mrs. Khan has authored 11 books so far with more contracted. She has appeared on television and radio numerous times, has been featured at international conferences in Denmark, Mexico, Singapore, Italy, and South Africa, and has presented all across Canada and the U.S. Rukhsana Khan is also a member of SCBWI, The Writers Union of Canada, CANSCAIP, and Storytelling Toronto. Without further ado....... Mrs Khan.


Can you please tell us a little bit about yourself?
I was born in Lahore, Pakistan and my father decided to come to Canada to give me and his other children better educational opportunities.
We arrived in 1965 and moved to a very white town in Southern Ontario. Growing up was very difficult and books turned out to be my lifeline.
Stories provided me an escape from the difficulties of my life. I never dreamed of becoming an author till my grade eight teacher said I should pursue it. He said I was a poet, and I should grow up to be a writer. He was the first person in my life who ever opened that possibility up to me. I wrote a couple of rough works in my teens and then gave up, thinking that being an author wasn’t possible for someone like me, from an ethnic minority. It wasn’t till fourteen years later, when I was twenty-seven that I decided to seriously go for my dreams. It took eight years for my first book to get published. Now I have eleven books published. The Roses in My Carpets is my second book and the book of mine that has been in print the longest. 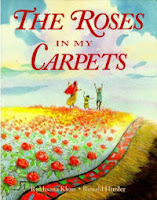 I had the privilege of attending Rukhsana's workshop and hearing her hilarious Golden Kite Award acceptance speech at LASCBWI11 last August. She is a fabulous oral communicator, which transfers well, of course, to all her stories. she is a natural born storyteller!

Enjoyed reading this interview very much. I also love the fact that Kareem is white!

Saba, glad you interviewed Rukhsana. She is one of my favorite children's authors as she really knows how to tell a good story. I have "The Roses in My Carpet" and cherish the story. I also have a collection of her books. I appreciated your sharing the story behind her sponsoring Kareem. I know a lot about the author, but I didn't know this story! Thank you so much for featuring her on your post. She's a remarkable person with a wonderful sense of humor!

What a fantastic interview. Thank you both so much. I have not read The Roses In My Carpets, but I would really like to see how Mrs. Khan tackled all those themes and kept the book at picture book level! (or maybe it's not a picture book? I couldn't quite tell...) And that final question is really a good one - "If I hadn't written this would I want to read it?" - I haven't ever thought in those terms before, but I think it's an excellent question! Thanks so much :)

I love your final question. That's a good one for the draft I'm working on today. My email: stacysjensen (at) gmail (dot) com.

Great interview! I met Rukhsana at the SCBWI Summer conference; we were at the same critique table. I like her advice to new authors, I will need to keep that in mind as I revise, revise.

Thank you Joanna. Yes, I read the whole story about Mrs. Khan's childhood and how she met Kareem, it was amazing. :)

Thank you so much Patricia. She really is a wonderful writer. I watched a video of her reading The Roses in My Carpet and was in tears! She really is a moving storyteller. So glad you learned something new about one of your favorite authors :D

Thanks Susanna!!! :) It really is a wonderful book and it is a picture book. Random.org will be choosing a winner for this book giveaway on Sun :)

Me too!!! I never thought about my writing that way! Thank you for stopping by and checking out the interview. :)

I would love to read THE ROSES IN MY CARPETS thank you. It looks wonderful.

I love that her teacher opened up the possibility for her! It was the same for me and I will be forever grateful to him for the inspiration. Great interview and great advice from Mrs. Khan. Thank you for introducing us, Saba!