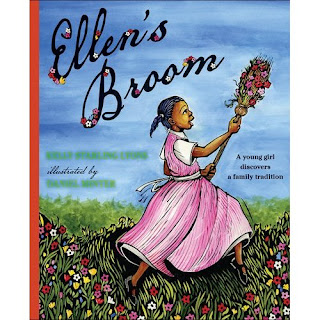 Last week I had the honor of reviewing a really wonderful book that is soon to be release. Ellen's Broom  by Kelly Starling Lyons. This book was right on time. We have so much to be grateful for as a nation. We have come a very long way. Some of you may remember I interviewed Kelly and her book, "One Million Men and Me." Well, her newest book will be released on January 5th 2011 but you can pre-order it on Amazon here. her newest picture book set in the reconstruction era. Before I post my review let me just tell you, I LOVE it!! I can't wait to have Kelly stop by during her book tour of Ellen's Broom which will be on the 12th of January!!!! My review is below the summary :)

Ellen always knew the broom resting above the hearth was special. But after it's announced in church that the marriages of former slaves will be registered and made legal, she hears more about why it matters so much. For her mama and papa, who could be sold away at a master's whim and whose union had no legal protection, jumping the broom was a way to show their commitment to being husband and wife. Now, as the whole family travels to the courthouse dressed in their best, Ellen carries the broom with them. With love, ingenuity and pride, she finds a way to celebrate her parents' right to be legally married and remember their past.

History and Traditions: Ellen’s Broom by Kelly Staring Lyons
Traditions are a wonderful way to remember history and how far we have come as a community and a nation. In Ellen’s Broom, one such tradition is portrayed. In the old days when many African Americans were slaves and at the mercy of their white slave masters, the sanctity of marriage was not protected or even viewed as legal. Slave husbands and wives could be torn apart and their families separated. One tradition some were allowed to have during a wedding ceremony was “jumping the broom.” That was a way an enslaved couple could prove their commitment to one another. Of course that was no proof in the eyes off the law.
When slavery ended, many married couples went to the courts and finally got marriage certificates to prove they were married. But there is something very sweet and endearing about the tradition of jumping the broom. The slaves did not let the law stop them for doing what they saw was their God given right, to marry. While there is no need for the tradition as a means of proving the validity of our marriages, the history behind the tradition shows a people’s strength against very hard odds. As an African-American, I’d love to see such traditions carry on. Ellen’s Broom beautifully illustrates how this tradition began and how important such traditions are to respect and protect.
Ellen’s Broom is told through the voice of Ellen, a young girl, as she witnesses her parents become legally husband and wife. She has always heard the story about the broom above her fireplace but when she realizes the importance as she watches married ex-slave couples get marriage certificates, including her mother and father, she decides it is only right that her parents jump the broom again to celebrate. But her father thinks the tradition is from the past and that it should stay there now that they are free. But Ellen reminds him how important the broom is and vows she will “jump the broom” when she grows up and gets married too.
I’m with Ellen; some traditions are worth keeping! J
Posted by Ms Saba (aka Teacher007.5) at 6:52 PM

Oh, thank you for bringing this to my attention. I wrote a review last week of One Million Men, which I'm saving for later. I love Kelly's work. Will have to get Ellen's Brooms. It sounds wonderful. I think I learned about Kelly on your blog.-- Patricia

This sounds touching and as though it's one of those important novels we all need to read. It's going on my list for sure!

Thank you Patricia, TCC and Heather!! Hope you ladies stop by on the 12th of Jan during her blog tour stop here. There will be a giveaway included :)

I'm going to pre-order. Thank you for sharing such a wonderful book. I know Ellen is thankful for you today. Happy Thanksgiving!

Sounds like a lovely book. Thanks for bringing it to our attention!