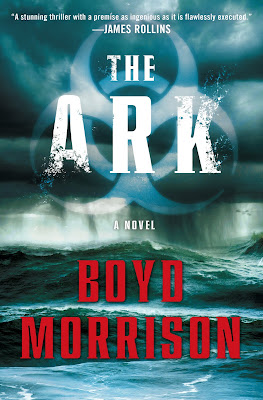 I give this book 3.95 stars. This was really interesting book to read. I love books that are centered on archeology ever since I fell in love with Star Gate's character, Daniel Jackson, who was an archeologist that studied ancient Egypt's pyramids.

The Ark also explored the age-old story of Noah's ark in the bible, its location and its history and a secret treasure hidden within it. The theory posed in this story of what the ark really looked like was different but very interesting and entertaining. The chapters were packed with lots of action. Something was happening in each chapter, either someone or something was blowing up or a piece of information was being obtained to move the story along. I love a story that does not have sex scenes or romantic elements. This story almost satisfied me in that respect but of course the lead male and female characters were so closely involved in the mystery and the fact that they shared one thing in common, someone wanted them both dead, they spent quite a lot of time together. What happens when two people spend that much time together? Yeah, one or both start developing feelings for the other and the rest is history. Now, while there was that element, I loved that I only had to skip maybe a few paragraphs of one such encounter and a kissing scene. Two scenes are not bad for an adult novel. I appreciated that because I really liked the story and all the thrills, action and mystery.

Short Summary of The Ark (hopefully I don't give any spoilers!)

Dilara Kenner is a well-known archeologist on a Peruvian dig. She suddenly finds herself thrust into a whirlwind of chaos when Sam Watson, an old family friend, contacts her about some information about her father, Hasad Arvadi, who has been missing for three years. Just before he tells her what he knows, Sam is killed right in front of her eyes. She learns about her father's recent research and finds out he found the real Noah's ark and that he wasn't just missing, but it was most likely he was dead, killed for something that would change the face of humanity. Just before Sam takes his last breath, he is able to tell her to get help from Tyler Locke. She does, only Tyler has no clue who or what she is talking about or why a man named Sam Watson would send her to him. Tyler is an engineer. Dilara manages to make contact with Tyler on an oil rig in the Atlantic ocean. She barely escapes a helicopter crash as she reaches his rig. When something goes wrong on the rig that cause a huge explosion, Tyler is convinced that someone wants Dilara and Tyler dead for something they may or may not know. Being an ex-military type, he takes it personal when his life and the life of his military friend Grant are threatened. He takes her back to Seattle which starts a whole new ball of death traps, attempted assassinations, and more dead ends but they also find out that her father's research about the secret of Noah's ark and the mysterious death of Hayden, a famous star, are connected. They also find out they have less than a week to discover who is trying to kill them, why their killers want them dead, what killed Hayden and his entire flight crew, and where the real ark is before the world as they know come to an end.