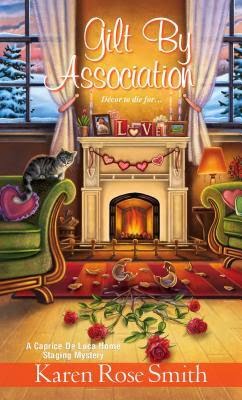 Between training her new puppy, helping her sister with her baby, and searching for the perfect vintage dress for Kismet's Valentine's Day dance, home-stager Caprice De Luca has a lot on her to-do list. But she's never too busy to do a little staging, and she's looking forward to thawing February's frozen real estate market with her Hearts and Flowers Open House. Her client Louise Downing's romantically decorated home practically staged itself. But when Louise is found murdered, Caprice is forced to turn her attention from sweethearts to suspects. And as the truth comes out in stages, she discovers that Louise had more secrets than a box of chocolate truffles.

A great cozy mystery to read on a wintry night with a cup of steaming tea. :)

I take it there was a book before this one as through out the story Caprice mentions her involvement in a previous murder investigation case. While it doesn't make a huge difference in this particular case, it's often mention was a bit annoying and could have been limited. But I guess the author had to since Caprice's "relationship"with Grant was based on their encounter in her first investigative case where he apparently saved her life. But other than that snag, I really enjoyed Caprice as a character who was dedicated, loyal and true to those she cared about.

When Louise, an old family friend is found murdered in her own greenhouse, just hours before her home staging event, Caprice promises her mother to find out the who and why behind the awful death. Between helping out with a charity event, her job as a home stager, raising and training her puppy, Lady, and her cat, Sophia, and wondering if there is even something between her and Grant, Caprice manages to not only reveal a vengeful killer but unearth secrets of Louise's troubled past.