The Editing Process
by Richard H. Hardy
Author of The Infinity Program


It’s interesting that a four letter word like ‘edit’ has so many different meanings.  I’ve heard that Eskimos have a dozen or so different words for ‘snow’.  I think it should be the same for the word ‘edit’.
When I was a young writer banging away on a typewriter, I thought of editing as the last stage in the process.  I thought it was just about correcting spelling and grammar.  Later I realized that editing was also about style and began editing for clarity, concision and flow.  When I reached this stage, the first draft then became little more than a warm-up—the real work began only upon its completion.

As I learned more about writing, I started to include structural changes as part of the editing process.  Like a tall building, a story’s structure must have a solid foundation.  In particular, I began to focus on the opening scene.


Starting points are not always obvious.  For example, if I wrote a story about a bank robbery, where would I begin?  Would it start with the thieves planning the heist?  Would it start as they entered the bank?  Would it start when a gun was stuck in someone’s face?  Would it start during their getaway?  The possibilities seemed endless to me.  My head used to spin!  Finally, I realized that imagination could create problems as well as solve them—it could present far too many options.  I learned then that logic and analysis also have a place in storytelling.  I began to break my story down to the bare essentials, the themes and ideas that engendered it.  Only then would I select a beginning that best suited my theme.
When Camel Press accepted The Infinity Program for publication I thought I knew something about editing.  But my editors at Camel Press taught me a lot.  Their first copy edit caught numerous examples of inconsistencies.  A character I described as strong in one scene, suddenly became weak and wimpy in a subsequent scene.  And sometimes the physical description of my characters and their back stories were too sketchy.
The copy edit of The Infinity Program also required the addition of entirely new material.  The copy editor requested two new chapters and I discovered opportunities to pull the reader into the very heart of the story.
The final Edit of The Infinity Program was the line edit.  I had always thought I was a concise writer.  I was astonished when my superb editor showed me that I was not.  She stripped away dead phrases that weren’t really needed and replaced weak words with stronger ones.  She improved the cadences, creating a much better flow.   It was a humbling experience but an invaluable lesson.
The editing process is enormously important.   If you can’t find a skilled editor to read your work, my advice would be to find all the books you can about the editing process.  In a way, I think, writing is like a three stage rocket at Cape Kennedy.  The first stage, the creativity and the imagination, gives you the lift-off.  The second stage, your own editing skills, gets you into orbit, and the third stage, the editor, gets you to your destination. 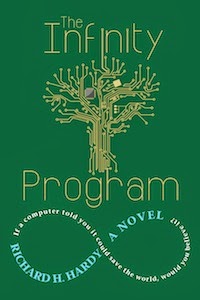 Jon Graeme and Harry Sale are unlikely friends. Harry is a world-class programmer, but his abrasive personality alienates co-workers. In contrast, Jon is a handsome and easy-going technical writer, the low man on the IT totem pole.

Sharing a love of nature, the men set out together, planning to go their separate ways--Jon on a hike and Harry, fly fishing. Three days later, Jon arrives at the rendezvous point, but his friend is nowhere in sight. When Jon finds Harry unconscious on the floor of a cave, Harry claims to have been lying there the entire time. But he is neither cold nor hungry. What Jon doesn't know is that Harry fell into an underground cavern, where he came into contact with an alien quantum computer.

Back at work, Harry jettisons his regular tasks and concentrates exclusively on inventing new operating language to access the alien system. In the process he crashes his office's Super Computer and is fired. Jon convinces the company to give Harry a second chance, arguing that the system he has invented will make them millions.

Jon has no idea what havoc Harry is about to unleash.
Richard H. Hardy's Bio:

Richard H. Hardy was born in Glasgow, Scotland, during a week of relentless bombing raids just before the close of World War II. The day he was born an incendiary bomb fell on the church across the street from where he lived, so he is fond of saying that he entered the world with a big adrenaline rush.

His family later moved to England and then on to America.

After college Richard bounced through a series of temporary jobs as he traveled around the country, wanting nothing more than to write fiction. A job driving a library van allowed him free time to write several short stories and work on a novel.

He and his wife moved to New Hampshire, where he took an entry level job at a software company. He was soon promoted to the technical writing department and ended up producing over 500,000 words of online documentation. After a few years he was promoted to the programming department and ended up as the Senior EDI Programmer, creating EDI maps and writing UNIX scripts and troubleshooting on AIX systems throughout the U.S. and Canada.

After he retired, he started writing fiction again. The Infinity Program is his first published novel.

Kobo buy link
http://store.kobobooks.com/en-US/ebook/the-infinity-program
Posted by Ms Saba (aka Teacher007.5) at 12:00 AM

Saba, thanks for inviting Richard back to your blog. What a great post! It's one I think every writer will be able to relate to.