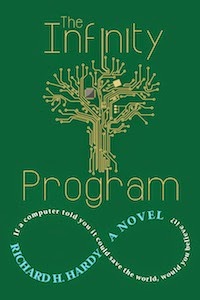 Jon Graeme and Harry Sale are unlikely friends. Harry is a world-class programmer, but his abrasive personality alienates co-workers. In contrast, Jon is a handsome and easy-going technical writer, the low man on the IT totem pole.

Sharing a love of nature, the men set out together, planning to go their separate ways--Jon on a hike and Harry, fly fishing. Three days later, Jon arrives at the rendezvous point, but his friend is nowhere in sight. When Jon finds Harry unconscious on the floor of a cave, Harry claims to have been lying there the entire time. But he is neither cold nor hungry. What Jon doesn't know is that Harry fell into an underground cavern, where he came into contact with an alien quantum computer.

Back at work, Harry jettisons his regular tasks and concentrates exclusively on inventing new operating language to access the alien system. In the process he crashes his office's Super Computer and is fired. Jon convinces the company to give Harry a second chance, arguing that the system he has invented will make them millions.

Jon has no idea what havoc Harry is about to unleash.
My Review
What I liked: The story was intriguing. I love the idea of using science and technology (an ancient alien one at that ) to fix our environmental problems. Some of the world incidents were kind of funny. I found the characters interesting. Jon I felt was the most fleshed out. While I don't get why he became such good friends with Harry, he was definitely a loyal friend. And I find that honorable. Harry was very mysterious, would have loved to know a little more about him. Lettie was a little harder to connect with. There was an element of romance between Jon and Lettie, but I was happy the author did not focus on it too much. A lot of it was relayed in flashbacks. The ending was brilliant! I did NOT see it coming! :)
What I didn't like: There was a lot that went over my head because of the technical jargon used throughout the story. Since I know next to nothing about hyper-computers and its technology, I often found myself skipping over it. At times, it felt like the story moved slowly before something major and interesting happened. Lettie's character was the only one that I could not connect with. It seemed like she was there but played no major role in the story. She was the token female character. There were quite a few typos and grammar mistakes throughout the books, more than I would have like to see in a book.
I give it 2 1/2 stars (Goodreads)

Saba, thanks for taking the time to read and review Richard's book.