It has been a while but I'm finally catching up :D Here is a wonderful author I would love to introduce to you all! Tameka Fryer Brown! I fell in love with her first picture book, Around My Way On Neighbors' Day, a rhythmic tale that celebrates the diversity of a close knit community. Her second picture book, My Cold Plum, Lemon Pie, Bluesy Mood, will be published in March 2013!


1. Can you tell us a little bit about yourself?

Well, I am--and have been--a lot of things: I'm a wife and mother of three, a children's book author, and an active Montessori parent and volunteer. I have been a medical supplies sales representative, a Montessori teacher's assistant, and a bible school teacher. I'd like to be an illustrator, a singer, and an actress. But for now, those things are just dreams. I haven't yet committed to a plan of action that would turn any of them into goals.
2. When and why did you begin writing?

I've always loved to write. As a youth, I remember winning a blue ribbon from the Dade County Youth Fair for a poem I wrote, and I also had an open letter published in a local newspaper. But as for the decision to make writing a career choice, that happened in 2005. I was a stay-at-home mom and had been looking for a just-for-me, cerebral type activity to fill a void that had been growing inside me. The idea came to me while reading a picture book to my youngest daughter. I thought to myself, "I can TOTALLY write these." Took a bit longer than I thought to write something worth publishing, but ultimately, my gut instinct was right , 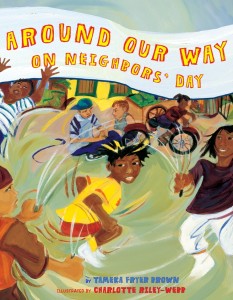 3. What inspired you to write "Around Our Way On Neighbors Day"?

This is always a weird question for me to answer, because really, the first draft of this story came to me in that twilight state one enters just before waking up. Before I opened my eyes, I had the rhyme scheme and the first verse worked out. By the end of the day, I had a complete first draft.  The story that ended up being published has a totally different rhyme scheme than the original (which was an ABC book), but the essence remains the same: a rhythmic love story between a young girl and her close-knit, diverse community.
But I do think there was a deeper inspiration for this story. I think my subconscious reached into my childhood memories and brought forth a story inspired by them.

4. What are some of your most fondest memories of your neighborhood growing up?

My fondest neighborhood memories actually come from my Bigmama's (my great-grandmother's) neighborhood. She used to watch me during the day when I was pre-school age, and then after school once I started.  I remember kickball games and jump-roping; learning cheers and forming singing groups that performed for the neighbors; buying frozen cups from the Frozen Cup Lady, as well as Lemon Heads and hot sausages; hoping my Bigmama would give my cousin and I some money for the ice cream truck that had just pulled up outside, and hoping it wouldn't take off before we were able to race down the apartment stairs and get back to it.  I remember respecting adults who I didn't know personally, but who told us to stop doing wrong when we were doing it. I remember everybody in the neighborhood--young and old--calling my Bigmama "Bigmama" too.

I think the love and sense of community I experienced at my Bigmama's house provided the emotional blueprint for Around Our Way on Neighbors' Day.


5. Can you share with us your publishing journey? What were some of your greatest challenges and how did you overcome them?

I think the greatest challenge was hanging in there. Although the time that lapsed from my joining SCBWI to selling my fist book was only 3 years (which isn't that long according to many), when you are a perfectionist who can be borderline compulsive, three years full of rejections and almosts can be excruciating.
I seriously considered ending my publication journey twice in those three years, and both times God sent me a signal that it wasn't time to quit yet.  The first time I was about to stop, I received an offer of representation from Jennifer Rofe at ABLA. The second time, I received a first place award in the Cheerios Spoonfuls of Stories Contest AND got my first book deal, both within a few months of each other. I took the hint.


6. What do you think is one of the biggest mistakes a new writer/author can make and how do we avoid it?
Not seeking out or listening to professional feedback on one's work is a major mistake. No matter how talented you may be, it is almost impossible to catch all of the issues that exist in your own work. Join up with a critique group that either has some experienced writers, or one where everyone is totally dedicated to growing in their craft. If you write for children, it's best to be in a group that writes for children as well. If it's a genre specific group, that's even better.  Professional paid critiques are options, too. It's a great investment in your craft. Ask around for recommendations, or analyze the service provider's stated criteria and testimonials to find the critique service that best suits you.

Raw talent only gets you so far in this business. Those who succeed are those who are willing to study and perfect their craft. 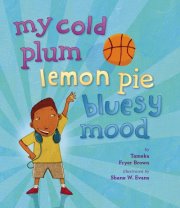 7. As a teacher, I am always looking for books to enrich my classroom, how can your book be used in the classroom?

Around Our Way on Neighbors' Day can be used to foster conversations about community, diversity, and poetry.  The beautiful, expressionist-inspired illustrations by Charlotte Riley-Webb can also be used in a study of art and various artistic styles. There is also a little-known holiday called Good Neighbor's Day (September 28) and AOW would be a great educational companion for informing students about that.   There is also a comprehensive study guide, created by Debbie Gonzales, that provides wonderful discussion questions and great extension activities that is perfect for both teachers and parents.

8. Is there anything you wish you had known when you first started out on your publishing journey?

I wish I had had a more realistic picture of the marketing aspect of publishing. I think I had a larger expectation of the marketing dollars a publisher would invest in a new author's title than turned out to be realistic. They certainly invest a huge amount to get the book published, but the unknown, unproven author still has a lot of hustling to do to try to get it on the radar of purchasers.

9. What advice do you have for writers who are plagued with writer's block?

Immerse yourself in the things, people, places that inspire your creativity. And when all else fails, give yourself permission to sit down and write crap. That's hard for me--the perfectionist--to do. Intellectually, though, I totally believe that the mere act of writing is the most creative boon in and of itself.
10. Last but not least, can you tell us three fun facts about yourself? :)
I love Krispy Kreme Doughnuts, but I am coveting the Maple Glazed, Bacon Doughnut. I've never had one. I want one!         My outfit of choice is jeans and a t-shirt. Actually, it's my pajamas, but I can't run errands in those, so....
I don't watch much TV these days, but the one show I make it my business to see is Once Upon A Time.  I got suckered in by a marathon ABC showed one night and now I'm hooked.
Posted by Ms Saba (aka Teacher007.5) at 12:00 AM