No Secrets, No Lies: Life in a Telepathic Society 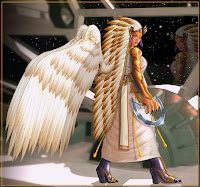 I am Nusa, Naqabashi warrior, defender of the clans, protector of the skies, daughter of Hidana, warrior queen of the Naqabashi clans. If my appearance frightens you, thank the volcanic atmosphere of Naqaba millennia ago. No, we did not always look like this, menacing glare, large wings, talon like fingers, enormous stature and telepathic abilities. We were once inferior creatures such as the land dwelling females of Naqaba. In fact, they are our relatives, fathers, brothers, uncles and sons. What happened? It is a long story that begins over ten millennia ago when the Naqaban people first came to this planet. A nomadic race, they traveled from planet to planet, galaxy to galaxy until they met a troubled race, humans, in the midst of a great battle. The Naqaban people, warriors at heart, defenders of the weak, helped the humans and forced back their aggressors. It was not long before the Naqaban were tracked and attacked by this new enemy, brought by the humans. The Naqaban crashed onto a volcanic planet and have been there ever since. The atmosphere ironically did not kill the people nor did it remain volatile. The period of planetary shifts passed as quickly as a few generations. Those affected by the volcanic fumes were young girls under the age of fertility. Their eyes turned green and their pale skin became copper toned. Women and their fetuses were unaffected as were the men and boys who survived the crash. The affected girls grew to give birth to daughters with the mutated Naqabashi genes and physique. Most of the early Naqabashi offspring died in infancy, however, those that survived later became the foremothers of the young but ferocious warrior you see before you.
Yes, we are strong. Yes, we are superior. Yes, we are survivors. And yes, we can be savage. We will defend ourselves. We will defend Naqaba. We will defend the Naqabashi way.